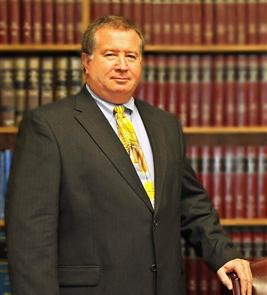 Steve grew up in Godfrey, Illinois and attended Alton-Marquette Catholic High School. He received his B.A. in Political Science from Eastern Illinois University in 1986. Steve attended and graduated from Northern Illinois University College of Law in DeKalb, IL in 1989 with a Juris Doctor degree.  He is licensed in the States of Illinois and Missouri as well as the U.S. District Court for the Southern District of Illinois.

Steve concentrates his practice on criminal and DUI defense, workers' compensation, personal injury, and social security.  Steve is also counsel to several local unions, including the Laborers of Southwestern Illinois, Teamsters Local 525, and he serves as counsel for the Alton Police Pension Fund.

In addition to practicing law, Steve has been an ice hockey referee and a high school hockey coach for several years, and he serves on the Board of Directors of the Missouri Ice Hockey Officials Association. He lives in Godfrey with his wife, Page, and their three children.